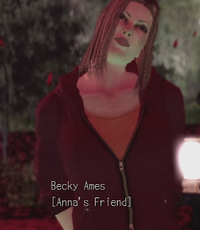 Becky Ames is the younger sister of Muses Gallery owner Diane Ames and the best friend of Anna Graham, the first murder victim.

She is in a relationship with Quint Dunn and works part time at the Milk Barn.

Not much is known about Becky prior to the events of Deadly Premonition, but it is implied that she's spent her entire life in Greenvale. She was either born into a wealthy family or acquired her fortune sometime later on when she was in high school.

The only living family member mentioned in-game is her older sister Diane, the owner of the Muses Gallery. They don't appear to be close, as Diane is often out of town and does not live with Becky at her home. However, Becky has a very close relationship with Anna Graham and Quint Dunn. Some of the townsfolk find this odd as Diane is quite sophisticated while Anna is an "airhead" and Quint comes from a poor family. While her older sister is outgoing, dresses well and prefers more "sophisticated" hobbies like art collection, Becky is reserved, dresses casually and spends her time doing "grittier" activities (working at a convenience store, hanging around Quint and his bikes, etc.). Her and Anna were both part of the "secret club" that was started by Carol and Thomas.

Becky knows a great deal more than what she's willing to tell when she is interrogated by Francis York Morgan in relation to Anna Graham's murder. She appears to have a great distrust in law enforcement and fears for her own life, thinking that she will also become a victim. York can do a series of events to try and get Becky to talk (showing her Anna's diary, discovering Quint's drug dealing and giving her engagement ring back to Quint), but she still refuses to say anything. After Anna's death, Becky completely shut herself off from the rest of the world, refusing to leave her bedroom.

Becky becomes the second victim of the Raincoat Killer. She is left alive and strung up in her bathroom, but is killed when an attempt is made to save her. York finds a safe key in Becky's throat which is used to gain access to Becky's diary. In it, she had written a letter to her sister Diane. Becky appears to know the identity of the Raincoat Killer and wanted to expose him. Unfortunately, she was unable to do so, in fears that if she left her house, she would be killed next.

Becky reveals that she was with Anna the night that she was killed, but she ran away in fear of her own life. She followed the killer after the crime and was the one who took the locket that Anna was holding. This makes her the mysterious "Miss Stiletto Heels" that York was looking for, as she was wearing a pair of Diane's heels when she visited Anna's body. She gives a package with the broken shoe and the locket to Isaach and Isaiah Ingram to be delivered to Diane for safe keeping.

Through Becky's death, York is able to conclude that the victims are not necessarily killed right away, which later plays a key part in the investigation. Becky can be seen along with the other victims as a goddess of the forest.

Becky's body hanging in the shower.

Becky tries to speak to York.

Anna, Becky and Diane in the Red Room.

Becky in the Red Room.

Becky and the other murder victims.