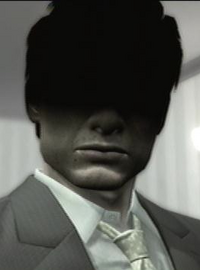 Brian Xander Morgan is Agent Francis York Morgan's father. He was a detective who was known for his talents in profiling. Although he possessed a stoic demeanor, he clearly loved his wife, Valentine Morgan, and son. Despite not showing any signs of mental illness or any murderous urges, he killed his wife and then himself one day in front of his son. The police were unable to determine his motive.

During York and Zach's switch and Zach's escape from the Red Room, he discovers that his father did not actually kill his mother. Forrest Kaysen had implanted his red seeds in her stomach, forcing a red tree sapling to grow and eventually kill her. Xander was unable to shoot her and stop the tree's growth. He gave some words of advice to his son, Zach, before taking his own life in front of him and Kaysen. Template:Trivia • Xanders model is Yorks old beta model with his face blackened

Xander finding his wife on the floor.

Xander tries to kill his wife.

Xander shoots his wife in the White Room.

Xander in the Red Room.
Add a photo to this gallery

Retrieved from "https://deadlypremonition.fandom.com/wiki/Brian_Xander_Morgan?oldid=5687"
Community content is available under CC-BY-SA unless otherwise noted.