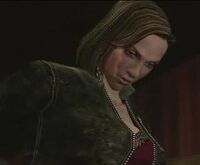 Carol MacLaine is the owner of and singer at the Galaxy of Terror bar. She is also the younger sister of Thomas MacLaine. Despite her strained relationships with most of the townsfolk, she maintains a very close bond with her older brother.

Agent Francis York Morgan and Emily Wyatt stumble across Carol in the Other World version of her bar, with her tongue missing and her mouth full of red seeds. She writes out on the floor, in her own blood, that both she and Thomas were merely substitutes for Emily in George Woodman's twisted game, finally pinning the murders on him. She then attacks Emily in a fit of rage and shoves red seeds down the deputy officer's throat. After a brief struggle, she succumbs to her wounds and dies. It is later revealed that Carol was the one who came up with the idea for a secret club, used to draw Anna Graham and Becky Ames into George's net.

Carol singing at her bar.

Carol as the fourth victim.

Carol in the Red Room.

Carol and the other murder victims.