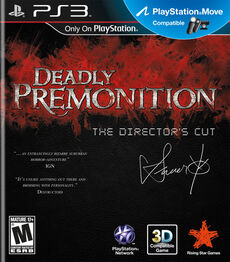 On March 8, 2012, Deadly Premonition: The Director's Cut developed by ToyBox Inc.[1] was announced for release in Europe and North America for the PlayStation 3 by Rising Star Games.[2] It was released on April 30, 2013. This edition has updated controls, stereoscopic 3D, updated HD visuals, PlayStation Move support, downloadable content including various pre-order bonuses, and additional scenarios written by Hidetaka Suehiro aka "Swery65".

This edition offers an extended ending, as well as adding a framing device to the game's plot so that it is now being told by an elderly Zach as a bedtime story to his granddaughter: Michelle Louise Morgan, whom he repeatedly mistakenly refers to as Emily. The extended ending shows the elderly Zach entering the same alternate reality that York, Emily, and all the victims inhabit, where he is warmly greeted by them. York tells Zach that he is glad to see him again, lamenting how long it's been since they last spoke, but reassuring Zach that he was there every step of the way, "even if you couldn't see me." York then proceeds to tell Zach about a new case that's caught his interest: an outbreak of illness in New Orleans that attacks the victim's nervous system. York asks Zach what he thinks about the case, offering the player three dialogue responses. Regardless of what the player answers, York responds that he "knew you'd say that" and tells Zach "it's time to wake up", followed by a smash cut to a screen that says "THE END". The game then returns to the main menu, but with the title screen now that of the fireplace in the elderly Zach's room. Louise can be heard off-screen informing her mother that Zach has disappeared, and she wonders where he could have gone to, which hints at a possible sequel.

On July 16, 2013, Deadly Premonition: The Director's Cut was announced for Microsoft Windows, aiming for a release on October 31, 2013. The official release date was October 29, 2013. The port is coming from one of the game's publishers, Rising Star Games, and will be having its debut on Valve's digital distribution platform, Steam. The PC version will have all DLC of PlayStation 3 version included in the game, adding some new exclusive DLC (also included). The game incorporates Steam Achievements and the control will be adapted to PC. The soundtrack is being released on Steam too.

Retrieved from "https://deadlypremonition.fandom.com/wiki/Deadly_Premonition:_The_Director%27s_Cut?oldid=5518"
Community content is available under CC-BY-SA unless otherwise noted.