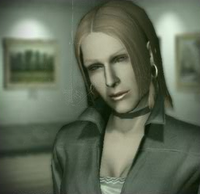 Diane Ames is the older sister of Becky Ames and owner of the Muse's Gallery in Greenvale. She is not highly thought of in the eyes of other women in town, due to her promiscuity around men and her narcissistic personality. Her only close friend in town is Nick Cormack, the owner of the A & G Diner. The two like to drink at the Galaxy of Terror bar and talk about art.

Diane is a wealthy young woman who owns the Muses Gallery in Greenvale. It was originally a large mansion, but she converted the interior into an art gallery. Despite the fact that her younger sister Becky Ames lives in the family's large waterfront mansion, Diane also lives in a small bedroom attached to the main office in the gallery. It is unknown if the sisters have other relatives in town, as there is never any mention of anybody else in the Ames family.

Diane seems to have a fascination with the outdoors, as much of the artwork featured is of trees. Diane often goes out of town to do business in Seattle. She is out of town when Agent Francis York Morgan starts looking into the murder case. She is initially thought to be a suspect in the case when stiletto heel imprints are found in the grass near Anna Graham's murder seen. Emily Wyatt suggests that Diane would be the only woman who would wear stiletto heels in a wooded area.

Diane catches a ride back into town with tree sapling salesman Forrest Kaysen just as the game's first chapter ends. York goes with Emily and George to question her about her knowledge of the murders at the art gallery. An agrument between Diane and Carol MacLaine can be heard just as York is about to walk into her office. York questions Diane about the argument, and the possibility of being at Anna's murder scene. Diane is largely unhelpful to the investigation and remains a strong suspect. Later on that evening, Olivia Cormack confides in York about Diane's relationship with her husband Nick Cormack, believing that the two could possibly be involved in the murders.

After Becky is murdered, York finds evidence that Becky knew the identity of the Raincoat Killer and had written a letter to Diane shortly before her death. Becky was the one wearing a pair of stiletto heels at the scene of Anna's death, but reveals that the pair of shoes belonged to Diane. She gives a package with the shoes and a locket taken from Anna's hand to Isaach and Isaiah Ingram to be given to Diane.   York's suspicions about Diane's possible involvement become stronger, and she and Nick are considered to be the prime suspects. York devises a strategy to monitor their activities together. York, Emily and Thomas follow Nick late one night as he's on his way to the art gallery to visit with Diane. After traveling through an Otherworld version of the art gallery, York finds Nick unconscious in the front lobby of the gallery and an unconscious Diane hanging from the ceiling. The Raincoat Killer left Diane barely alive, and York saves her from falling and being impaled. Diane, however, is later crushed by her giant tree sculpture and becomes the third victim of the Raincoat Killer.

Forrest Kaysen becomes a suspect in her murder when he is found locked in Diane's office. He also reveals that the two of them were in a sexual relationship. Nick is seen as the bigger suspect, however, and is arrested as her killer. He is later released when the real identity of the Raincoat Killer is revealed.

Diane is later seen with the other victims as one of the forest goddesses.

Diane hanging in her gallery.

The police find Diane hanging in the Muses Gallery.

Diane lays dead in her gallery.

Diane, Anna and Becky in the Red Room.

Diane in the Red Room.

Diane and the other murder victims.