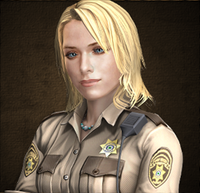 Emily Wyatt is the leading lady of Deadly Premonition and has been described as the sparkling jewel of Greenvale.

She is the first local resident that Agent Francis York Morgan introduces himself to, and seems to respect his judgment, even if she disagrees with his lone-wolf methods. She is a tough, yet considerate police officer, friendly with almost everyone in town. Unlike most of the other characters, Emily was not born in Greenvale and instead hails from Seattle. She is a terrible cook and prefers steak above all other foods.

Emily grew up in Seattle, where her father was a stockbroker. He seemed to care more for his investments than his family, and thus Emily was much closer with her mother, who was much more interested in her. The family moved to Greenvale 10 years ago while Emily was still in high school. Emily reveals that she was once asked out when she first moved to town by George Woodman. She declined his advancement, which unbenownst to Emily, put George's obsession with her into motion.

Sadly, Emily's mother died of cancer soon after moving to Greenvale. She entrusted Emily with a gold leaf-shaped necklace before her death. Emily's father is still alive during the events of Deadly Premonition, but Emily reveals that she is still not very close to him in her adult life.

During the course of the game, Emily accompanies York on all of his various investigations. She and York get to know each other on a more personal level outside of the investigation when she visits York's hotel room late one night.

When York goes missing, she goes to investigate the Clock Tower, where she is finally playable, with the help of Forrest Kaysen and his dog Willie. Emily goes into the Clock Tower alone where she finds Thomas, swinging on gears in his sister's dress. Thomas reveals his extreme hatred for Emily over jealousy of George's love for her. Despite this, Emily is hesitant to kill Thomas, but is finally able to do so.

Afterwards, she is kidnapped by Kaysen, and is implanted with the soul-consuming seed which slowly destroys her. She begs Zach to shoot her (something he can't bring himself to do) and ultimately tears the sapling out herself, freeing her, but directly causing her death. Dying in Zach's arms, she confesses that she loves him and wanted to be with him. Zach entrusts her soul to York before finally confronting Kaysen.

York and Emily are later seen in the Rainy Woods, along with all of the other victims of the case, even Thomas (whose death was Emily's doing).

Emily at the town meeting.

Emily and the others track Nick.

Emily in the Otherworld

Emily in the Otherworld.

Emily and Harry in the White Room.

York and Emily in the afterlife.
End Spoilers.
Community content is available under CC-BY-SA unless otherwise noted.