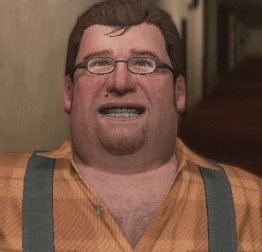 Forrest Kaysen is a sapling salesman who is currently on vacation in Greenvale. He is followed around by his faithful dalmatian, Willie.

Kaysen arrives in town with Diane Ames shortly after the town meeting. York first encounters him at the hotel, where the salesman is also staying. He tells York that he has been coming to this town for several years and really fell in love with the atmosphere. He also gives York one of his red saplings as a sample, telling him that it requires a “certain technique” to make them grow into trees.

After meeting with Diane Ames at her art gallery, York discovers that she is involved in a sexual relationship with Kaysen. He later confesses this to the agent, saying that he didn't want his wife to find out, as the two are currently going through a seperation. Kaysen explains that he met Diane at a bar in Seattle, where he was currently working, and offered to drive her back to Greenvale. He also admits to being present during a heated argument between Diane and Carol MacLaine about a key piece of evidence in the case, making him a suspect. After the death of Diane, York finds him locked up in a secret room in Diane’s room. He appears disoriented and wearing her lipstick on his cheek. York reluctantly lets him go, but his suspicion of Kaysen does not fade.

York is suddenly kidnapped after discovering the identity of the new Raincoat Killer. Kaysen, along with Willie, follow his trail around Greenvale and eventually help Emily rescue him from the clock tower. During the chase, Kaysen opens up to Emily, telling her about his past and problems he’d had with his mother. He also talks openly about his relationship with the Ingrams, especially with Isaach and Isaiah Ingram. Willie interrupts his conversations and presses forward to the community center. The group frees York and heads to the police station to finally confront the Raincoat Killer.

Emily is attacked at the station and York entrusts her to Kaysen’s care, demanding that she be taken to the hospital. He argues with York to come with them. Eventually he relents, telling York that he can’t be held responsible if anything happens to her. York deals with the Raincoat Killer and ends up at the hospital to find that Emily is not there. The doctor gives him a note from Kaysen, containing a map and a key. He follows the map and realizes that Kaysen is not the innocent salesman he appeared to be.

York meets up with Kaysen at the community center. There he finds Emily, who has been implanted with one of Kaysen’s saplings. Kaysen laughs at the two of them and explains what has really been going on. He is an emissary from the Red World, bent on tormenting Greenvale and spreading his red seeds. He admits to being a part of the original massacre by creating the gas that made the townsfolk crazed. Kaysen tells York that he was responsible for sending George on his path to insanity.

York, unable to handle what is happening, is propelled back into the memory of his parents’ deaths. It is then that he realizes Kaysen was responsible for that as well, implanting his seeds into his mother and encouraging his father to kill her. Kaysen then attacked Zach, the original personality, which prompted the creation of the York personality. This realization releases Zach from the red room. Kaysen becomes angry that Zach has escaped and proceeds to attack him. After a long battle, Zach is finally able to destroy Kaysen and stop the spreading of the red seeds.

Forrest Kaysen, initially appearing to be a friendly sapling salesman, is in truth a childishly sadistic agent of the Red Tree. A being hailing from the Red World who spreads chaos wherever he goes, Kaysen travels from town to town planting red seeds to spread his master's influence. On his own time, Kaysen goes from house to house raping women to make them give birth to his tree saplings, forcing the husbands to either shoot their wife or let her die a withered husk. This is the fate that bestowed upon Francis Zach Morgan's mother and father, with Kaysen scarring the young Zach and imprisoning him in the Red Room. During the 1950s, Kaysen helped the military spread a purple gas across Greenvale, which results in a massacre that wipes out the entire town. Traveling to Le Carre in 2005, Kaysen was responsible for Lena Dauman's murder spree, assisting her in the creation of the deadly drug Saint Rouge, which kills plenty of people across the country. Returning to Greenvale in 2010, Kaysen instigates the new Raincoat Killer murders out of sheer boredom, and impregnates Emily Wyatt with his sapling, getting joy from Zach's suffering. Even after his death, Kaysen's spirit continues to haunt a traumatized Zach, luring him back to Le Carre to become his new pet monster, and controlling Aaliyah in an attempt to kill Zach, Patricia, and York.

Kaysen appears as a cheerful and joyful man, always with a smile on his face. He is friendly towards anyone, and doesn't get angry if not provoked. He has a certain friendship with Isaach and Isaiah Ingram, spending a lot of time with them and letting the two children to play with Willie, as well as escorting them with his car. He is also an affectionate and regular guest of Polly's hotel. He also has a long term, sexual relationship with Diane, citing it as one of the main reasons he regularly comes back to Greenvale, even though he has always tried to hide it, and reveals it only when he's forced to do it. When he becomes a suspect, he starts to be more hostile towards York, event thought he respects the latter's job, and ultimately help Emily to rescue the FBI agent when is kidnapped. He shows a strong faith in Willie and dogs in general, saying they are very intelligent creatures that would survive the man's disappearance without that much effort.

Behind this reassuring facade, Kaysen is actually a cruel and merciless monster, indirectly responsible for countless murders and deaths across North America and the carnage that bathed in blood Greenvale fifty years ago and gave birth to the Raincoat Killer. He spends his time manipulating several men in becoming serial killer using the legend of immortality behind the red seeds and implanting them by himself in several young women, possibly by rape, leading them to a terrible death. He has no consideration for his victims, both innocent or those he sends on the path of insanity, considering George an idiot as he required so much time to discover the red seeds, despite being a native of Greenvale. He is also quite sadistic, and enjoys to torment his victims, as well as to offer to the women's beloved a sadistic choice to kill them in order to stop their suffering. He also has no remorse to deface the eight years old Zach's face and trapping them in the Red Room, laughing gleefully all the time. Even more disturbingly, even after he shows his true colors, he acts very childishly, talking in very smug and theatrically way, as all of his terrible actions are nothing but a funny game for him. He also doesn't lose his self irony, complaining with himself for his laziness and dislike for physical activity.

What makes Kaysen really monstrous, even compared to George, it's he is not motivated by a traumatic past or delusion of power and immortality, but he delights simply in the suffering and agony of anyone around him. While he declares to be a emissary of the Red Tree, it's clear he takes great pleasure in doing his several nasty and depraved actions, and no other creature of the Red World shows to be sadistic and merciless like him. As an emissary of the Red Tree, Kaysen has a high opinion of himself, declaring he has always been something more of a human, as he is a superior being. He has a very poor opinion of humans, considering them very stupid creatures that just require hardly a push or inhaling the red sees to be manipulated and become puppets in his hands. However, this pride let him to underestimate Zach and the latter's force, which ultimately lets to his downfall.

Kaysen has three separate mutations, aside from his human form. The first one that Zach encounters is similar to George’s transformation. His body becomes grossly overlarge and his hair shoots straight up. He is the most vulnerable to bullets in this form. The main attacks he uses are shooting projectiles at Zach and rolling into him like a boulder. In this form, however, he has great difficulty getting up because his midsection is vastly larger than his limbs.

Kaysen’s second form is the most animal-like. He crawls around on all fours and his tongue shoots out several feet. Zach cannot attack him when he is in the form and can only run down the base of the tower while dodging his attacks. He has difficulty turning around and frequently falls off of the stairs.

His final form is almost identical to his human form. He becomes a giant capable of crushing Zach with his fist or killing him with shots of green fire. He cannot be injured by bullets or melee weapons. The only way to hurt him is to shoot at the doll in his hand until his life runs out.

Kaysen on the case.

A Kaysen doll in the Red Room.

Kaysen and Willie search for York.