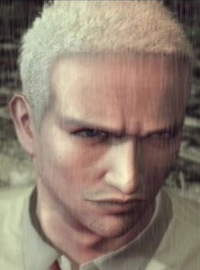 Zach is Francis York Morgan's closest and most reliable friend, despite the fact that he is seemingly all in York's head. York constantly talks out loud to his "invisible friend" during his asides and reviews, as well as chatting with him idly during their off time. While Zach is never heard responding, York apparently does hear his replies. Zach is always there to help in any way he possibly can, often being the one that York goes over evidence with.

It is clear that Zach is not a physical manifestation (at least not one that the player can see) but it is initially unclear whether Zach is some kind of psychosis, a Twin Peaks reference (as Dale Cooper dictates his investigations through a tape recorder to a mysterious woman named Diane) or just a narrative device for the story. Eventually, Zach's true nature is revealed.

Zach and York have been friends ever since a particularly disturbing incident during Zach's childhood, when York came to console the grieving Zach who had witnessed the murder of his mother at the hands of his father. Ever since that day, Zach had always been there for York, helping him and keeping him company, and the two shared such a close bond they became the best of friends, despite the bizarreness of their relationship. York continued to keep Zach close to him into his days as an agent, where Zach was more than willing to help York on all of his investigations.

As York trekked through the mystery involving the Greenvale murders, Zach was there as he normally was, providing York with company and a second opinion. Their friendship also remains unbroken despite both of them falling in love with Emily Wyatt, though Zach steps back because of his unusual situation, and instead tries to help York work out the courage to court her, and listens to York in discussions of his affection. Zach is also there when York finally solved the crime, putting George Woodman's reign of terror to an end.

Towards the end of the game, Zach and York find out the true mastermind behind the events that shattered their childhood, Forrest Kaysen, a demonic entity that not only forced York's father to kill his mother to spare her from the red tree growing within her, but he also was behind George's descent into madness. This revelation also comes with the startling realization that York was the imaginary friend, not Zach.

York approached Zach in his time of need, swapping places with him and allowing Zach to recover in the Red Room locked deep within his mind. As they grew, they both forgot this detail, and Zach was more than happy to spend his days within the confines of their psyche. However, after this realization, Zach finds himself forcefully put back in charge of his body, with York resuming the supporting role.

Zach is forced to fight Kaysen in a one on one battle, eventually overcoming the demonic entity with his determination and marksmanship, putting an end to the mystery once and for all. In the aftermath, Zach finds himself saddened by the loss of Emily, who died at Kaysen's hands, as well as his best friend, York, who leaves him to be with Emily and to teach Zach that he no longer needs York to survive. While Zach is saddened, he cheerfully accepts York's judgment and leaves Greenvale to live his own life, leaving the souls of York, Emily, and the other victims in Greenvale, promising to come visit them again.

Deadly Premonition 2: A Blessing in Disguise[]

The exact nature of Zach may never be entirely clear, but when the York personality is finally put to rest and allows the Zach personality back out, he changes physical appearance and all of the citizens of Greenvale instinctively know to call him Francis Zach Morgan, or Zach. Also, throughout the game, different townspeople have commented on York's scar, which is admittedly not very large, but Zach has a very large, prominent facial scar. This may indicate that the townspeople of Greenvale have known Francis Zach Morgan all along, possibly instead of Agent York, and that the green-eyed version of Francis Morgan seen throughout the majority of the game was his own self-image and not reality.

Zach as a child.

Zach walks away from a defeated Kaysen.

Zach after his fight with Kaysen.

Zach clears up some questions with Harry.

Zach in the forest.
Community content is available under CC-BY-SA unless otherwise noted.
Advertisement