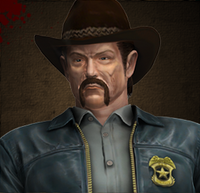 The "monarch" of Greenvale, as York describes him, is an old-school cop who believes his hard-ass methods are the best way to investigative success. A self-described "passionate" man, George chafes under York's authority but eventually softens and grows to understand him, sharing even his intimately painful backstory with the young agent. Throughout the game, George provides a more stern and traditional foil to York's more eccentric practices, as well as providing York with the necessary tools he needs to solve the case despite having some initial misgivings about allowing York to assume full command of the case.

George was raised alone by his mother, not knowing who his father was. His mother was severely mentally ill, often going out of her way to abuse and harass her son, physically and emotionally. George's mental and physical scars would never heal, leaving behind a patchwork of scars on his back from her cruel "tree punishment", where she would whip him with the thin branches of the trees in their back yard. To add insult to injury, she insisted that this hurt the trees more than him and George admits that, at one point, he apologised to one of the aforementioned trees. She also left a huge scar on his cheek, where her high heel punctured his cheek when she stepped on it.

Despite his horribly abusive environment, George grew into a strong man and became a hard-line cop, whose success made him rise to the rank of Sheriff, and his dedication and resolve earned him the respect of his entire community. As the Sheriff, George became the unofficial "leader" of the community as well. As such, it fell on George's shoulders when the murder of Anna was discovered. The fact that the FBI became involved did not help the situation in George's eyes, who was determined to solve the case without outside help.

Events of the Game[]

George, along with Emily Wyatt, is there to meet Agent Francis York Morgan when he arrived into town. George expresses his disapproval that the FBI have poked their noses into a small-town, but he understands the urgency, insisting that York lay back and not involve himself too much. He also provides York with the Master Key, giving him access to all the town's police vehicles.

York then accompanies George and his team to the Greenvale Sheriff's Department, where they discuss the situation at hand. George also allows York to accompany him to the local hospital to see Dr. Ushah Johnson in order to get the autopsy report for Anna. However, Dr. Johnson's games designed for York only served to irritate George.

After the autopsy report, George is shocked to find that York, after examining the body himself, declares his control over the case. However, George backs down once York presents the Red Seeds he carries with him, proof of the linked cases. Afterward, York encounters the 'Mysterious Capitalist' Harry Stewart and his aide Michael Tillotson. The former gives him a cryptic warning about the rain. George advises York to ignore Harry's ramblings before moving on to the site where Anna's body was found.

Once there, while York gathers evidence, George decides to make his own theory, mistaking the female accomplice for the killer just wearing Anna's shoes for some reason. York corrects him and claims the murder happened at the Lumber Mill, causing George some amount of agitation. However, he respects the Agent's theory and goes along with him.

After York makes his discoveries, George travels with York to the old Lumber Mill, to help confirm the detective's suspicions. George is angered to be considered a suspect still, as York asks him to remain outside while he investigates alone. When York returns after another encounter with the Raincoat Killer, he asks George and Emily to show him their backs, much to George's annoyance. Emily agrees, however, and George, unable to deny such a request if Emily complies, follows suit, showing his scar-covered back to the agent and preferring not to discuss it.

George also accompanies York after he decides to hold a town meeting, presiding over the evidence and suggesting that York meet the entirety of the town's residents. Afterward, Emily suggests they get something to eat, which George happily agrees to. During the meal George agrees with York's philosophies on crime.

The next day, George and Emily accompany York to the Art Gallery, as Diane Ames, the galleries owner, is back in town, and remains outside with Emily as York goes inside to investigate. When York returns says that they need to go speak to Nick Cormack to confirm Diane's story. George says he has some paperwork to clear up, and tells York to go with Emily to the A&G Diner.

Later, George radios Emily to tell her and York about something happened at Becky's House after Quint called it in. York tells Thomas to call him and tell him to come to the house and wait outside. He entered the house alongside Emily and Thomas, and discovered Becky, who had been heavily injured and strung up in the bathtub, who York had just discovered moments before. He tells Thomas to cut one of the wires to try and free her, and despite York's warnings, cuts it himself, springing a trap that strangles Becky to death.

George is extremely gruff and stern, proving to be a very serious man, especially when it comes to his job. George has a rather short temper as well, as evidenced by his lack of patience with York, Ushah, and several other characters. George is also a very close follower of the rules, making sure not to break law or regulation whenever he can help it. However, George's stern nature lends to his job rather well, and his dedication to his tasks has earned him the respect and admiration of most of the city. Also, Emily insists that George has a rather compassionate side, which is usually too embarrassed to show others, else ruin his "tough guy" reputation. Despite this, George is also rather secluded, apparently not having many friends outside of the police department.

He initially doesn't like or trust York, and although accepting the situation, saying he plays things like the book, referring to city officers as corrupt, saying that we'll handle the investigation. He also doesn't respect York, going so far as to call him Agent Morgan until late into the game.

George also has a fixation with authority and proving his worth, going out of his way to show off his strength and skill. Trophies and symbols of power adorn his office, in a way, York remarks, that looks like he's trying to show off. George's dedication to power and strength lead him to work out constantly, going so far as to actually NAME his dumbbells, Arnold and Sylvester (Named after Arnold Schwarzenegger and Sylvester Stallone, most likely). George admits that this fixation with power is likely a leftover from his abuse, where his mother flaunted her power and strength by being bigger and stronger than him, for a time.

However, late in the game, George is revealed to have a much deeper, darker, hidden side to his personality. George, under the demonic influence of the Red Tree, is ruthless, cunning, and almost sadistic in nature, points he can hide with extreme skill around others. His actions towards his own followers are cruel, leading him to mentally and physically abuse them very badly. He torments those close to him on an emotional level too, including fueling Thomas's inferiority complex and unrequited love, and mocking York for his failures. George's obsession with strength also leads him to kill all the victims of the game's events, and his almost animalistic insanity lead him to physically and sexually torment those subservient to him, including Thomas. However, when faced with defeat, George's madness is further exposed, as he breaks down into a childish persona pleading for forgiveness. He also admits to having felt guilty for killing Anna, but the guilt had long since passed.

He also shown a egotistical side when York finally confronted him, claiming to be divine and chosen one. His overconfidence in the fight against York hinders him, helping York defeat him.

However, it is strongly suggested that it was the influence of the demonic energies of the Red Seeds and the manipulation of Forrest Kaysen that pushed George over the brink into insanity, though it is never revealed how long George's mind had been snapped.

George's main traits lie in his physical strength and his dedication to duty. George shows that he is physically capable of moving very large loads and shoving other people with impressive force. He's also reportedly not a bad marksman, but his skill with firearms is not showcased in any other way than his hunting trophies. He can also be very stealthy, as he was able to sneak up on a group of deer. George is also not too bad at criminal profiling and investigation, though York outclasses him by a severe amount.

Later, George's true cunning is revealed, able to lie and cheat his way out of just about any situation and even fool someone as clever as York into thinking his incompetence is genuine. This is shown most prominently when George attempts to pass off his involvement in Becky's death as an accident, when later events reveal otherwise. He was also capable of improvising to situations, as he makes Diane's death look like an accident after York saved her from what her intended death was. George also receives horrific demonic powers from the Red Seeds, able to make his body stronger, bigger, and more resilient using their power. In fact, when engorged with demonic energy, George is almost invulnerable, save for the scars on his back and cheek. He can easily lift human beings clear over his head and toss them away like ragdolls, hurl a heavy axe incredible distances and quickly cut through doors with his axe. George can also summon enough energy to physically change his body, becoming, at least in the Shadow World, a gigantic, ogre-like demon with radiant white hair and glowing red scars. This transformation only further increases his physical attributes and makes it harder for York to kill him.

George tries to move a statue in the Muses Gallery.

George introduces himself to York.

George in the Galaxy of Terror.

George at the town meeting.

George tips his hat to York.

The red tree scar on George’s back.

George explains his motives to York.

George’s dead mother in his basement.
Community content is available under CC-BY-SA unless otherwise noted.
Advertisement