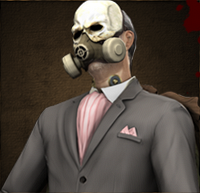 Harry Stewart is a mysterious old man who uses a wheelchair and wears a gas mask in public. He uses his assistant, Michael Tillotson, to speak for him and take care of his needs. During the second half of Deadly Premonition, he provides Agent Francis York Morgan with hints and information about Greenvale's dark past.

A corrupt multi-millionaire with a mysterious past, Harry Stewart operates as a legitimate businessman to the public. As the richest and most powerful man in Greenvale, he owns most of the town and is both greatly feared and respected by many of its inhabitants.

He tends to come off as extremely creepy and or intimidating to others and is known to be very cryptic to most of the people that he meets.

Harry Stewart was a young man during the lumber boom in Greenvale in the 1950s. Born in the 1930s to a happy couple, he had all the makings of a pleasant childhood. He was a curious person, always interested in what was happening in town; this curiosity led to the discovery of a sinister plot by the military to test an experimental gas on the town.

Later in life, Harry inherited his parent's immense riches and began to purchase most of the land and property in Greenvale. He lives in a large mansion at the edge of town. Despite owning almost everything in Greenvale, Harry rarely comes out in public. He speaks in riddles through his assistant (who is later revealed to be his adopted son) Michael Tillotson. Although he did marry, his wife suffered from a mental illness and was constantly abusive towards their son. Feeling powerless to stop his wife's abuse, Harry cut all ties with his family and went off on his own. His mannerisms made him became known as a rich, crazy old man who was always spouting nonsense.

After escaping from his arguing parents, Harry impulsively pursued his curiosity of the newly built clock tower by sneaking in through the theater within the community center and climbed up the stairs to the tower's peak. Upon arrival, he discovered the military using a machine to eject purple gas through the air. Terrified, he rushed back into town and found that the populace had been consumed by bloodlust from the gas and had begun compulsively killing each other without restraint, the most proficient among them being an ax wielding man in a raincoat stained red with blood.

Harry, also becoming overwhelmed by the gas upon exiting his car, acquired a metal pipe from the ground and assaulted the man despite witnessing the ax wielder effortlessly cut down four other assailants. As with the others, the raincoat killer was able to repel Harry's assault striking him down to the ground and knocking him unconscious. The next morning, Harry found the majority of the townsfolk dead, including his mother. The military issued a gag order and erased any documentation of the massacre from recorded history.

Despite what he had witnessed, Harry kept the incident a secret along with the other survivors. Greenvale slowly began to recover. The massacre had changed him, however. He built a large house at the edge of town and rarely came into contact with the other people of Greenvale. Because some of the gas had seeped into the soil during the bloodbath, he began to wear a gas mask in public to protect himself. The story of what really happened in Greenvale became buried in his memory, never to be told.

The murder of Anna Graham sparked renewed interest in the legend of the Raincoat Killer. After the arrival of FBI Agent Francis York Morgan, Harry began to keep a close eye on the case, intervening at seemingly random moments. He used his aide, Michael Tillotson, to convey messages to York, telling him to take it slow and to keep his mind open to all possibilities. When York decided to visit Harry at his house, he sent the agent on missions to collect red seeds and files from the original killings. Once York proved that he understood the true depth of the case, Harry tells him about the original Raincoat Killer. He also told York to remember that nothing in life ever stays the same, a statement that proved vital in helping York to catch the new Raincoat Killer.

After the mystery was solved, Harry revealed that his last name was actually Woodman and that he was George Woodman's father, making him the son of the original Raincoat Killer and the father of the new Raincoat Killer. He also revealed that he was the old man in the white room with York, and hinted that he tried to kill his wife in much the same way that York's father tried to kill his own wife. He expresses regret in not being able to do so, as this action may have stopped George's abuse and saved the lives of all of his victims. He and Michael remain in Greenvale after Agent Morgan departs, once again picking up the pieces after an immense tragedy.

Harry at the town meeting.

Harry and Michael speak to York in riddles.

Harry as a young man.

Harry without his gas mask on.

Zach and Harry speak after the murders.

Harry and Michael at their home.

Harry hooked up to a feeding tube while Michael helps.

Harry without his mask in the White Room.

Harry looks upon Emily in the White Room.