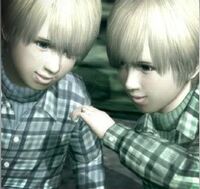 Isaach and Isaiah Ingram are the 6 year old twins who find Anna's body in the woods. They frequently call her a 'goddess of the forest' and appear unaware that she or any of the other girls have died. They are never seen apart and are always with their parents, their grandfather Jim or Kaysen.

They play a significant role through the story as both visitors to the Red Room who give Agent Morgan cryptic clues, and as key witnesses, being the first two to see Anna's corpse.

Directly before the clock tower battle, they are overcome by the purple fog and stab Agent York in the back with scissors. After the murders are solved, they become the caretakers of Willie.

The twins speak to the dead girls in the forest.

Isaach as an angel in the Red Room.

Isaiah as an angel in the Red Room.

The boys in the Red Room with the murder victims.

The twins are among the citizens that are possessed.
Community content is available under CC-BY-SA unless otherwise noted.
Advertisement