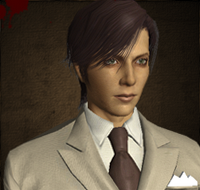 Michael is Harry Stewart's aide and caretaker. A polite and well mannered young man, he stands out among the townsfolk for his good looks and calm nature. In addition to watching over Harry, he also acts as his interpreter, as the gas mask Harry wears makes it difficult for him to speak. Michael always relays information from Harry in the form of rhymes. He often speaks this way when addressing Agent Francis York Morgan on his own.

After the tragedy in Greenvale, he stays in the mansion with Harry to help rebuild the town. Through Michael's side quest, it is revealed that Michael is Harry's adopted son. Now that Greenvale is in need of rebuilding, Harry thinks it best to drop the act the two had going and to instead work together as a family if they want to truly help Greenvale.

Michael and his charge, Harry.

Michael and Harry eating in their home.

Michael is among the other citizens of Greenvale that become possessed.