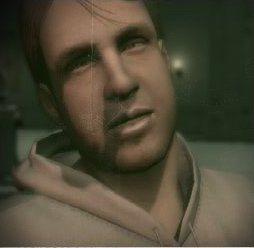 Nick Cormack is the owner and head chef of the A&G Diner. He rarely speaks and can come off as cold, but he is widely appreciated for his cooking skill. He spends his time cooking in the kitchen while his wife Olivia Cormack waitresses and talks with customers.

Not much known is known about Nick prior to the events of Deadly Premonition. Nick is known as being the best chef in all of Greenvale. He is currently married to his wife Olivia, but the two are shown to have a strained relationship throughout the course of the game.

Nick often leaves Olivia to close up the diner while he goes to drink at the Galaxy of Terror with Diane Ames, the owner of the art gallery. He, like Diane, is a lover of art. He isn't particularly close to anybody in town, but seems to have a special connection with Diane. Despite this, he claims his relationship with Diane was non sexual and that he never cheated on his wife.

York becomes suspicious of Nick's possible involvement with the murders. York, Emily, Thomas and George decided to monitor his meeting with Diane on the night of her death hoping to learn something new. Nick is drinking alone at the bar that night, but goes to talk to her about her sexual relationships with several men. They find Nick unconscious on the gallery floor after being knocked out by the Raincoat Killer. After Diane's death, Nick is arrested as a suspect in her murder and is locked up in the Greenvale Sheriff's Office.

While behind bars, Nick has time to reflect on his behavior. He feels remorseful for sneaking around behind Olivia's back and thinks about her constantly. He realizes that he loves her very much and doesn't want to lose her. A side quest opens up for York to take letters between the couple while Nick is locked up. Upon completion, Nick will give York a key to the diner where he can find the expanded item bag in the kitchen.

York doesn't truly believe that Nick is guilty, but knows he must be locked up for the remaining course of the investigation anyways. Nick's name is cleared after George reveals himself to be the killer. He and Olivia vow to "start over" and renew their relationship after this. If the player visits the A&G diner after the main story has been finished, Olivia will note that they cleaned the diner together as part of this fresh new start.

Nick in his bedroom after his release.