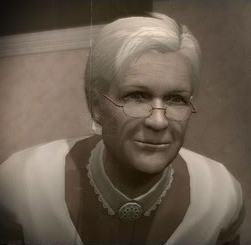 Polly Oxford is the elderly owner of the Great Deer Yard Hotel. She used to operate it with her husband before he passed away a few years prior to the game's events.

Portions of Polly's hotel are dedicated to the history of Greenvale, and Polly herself is a source of information for York. Among other things, she tells him about the town's lumber mill and its foundations, which leads York to the site of the first murder. She also shows him a photo from the completion of the clock tower, which includes other town elders from around Greenvale.

Polly is hard of hearing and frequently misinterprets what York is saying. She also tends to be a bit pushy and will often forget what she was talking about.

She clearly suffers scoliosis as she is always seen holding her back bent over when standing.

Polly at the town meeting.

Polly talks to York about the theater.

Polly behind the desk at the hotel.
Community content is available under CC-BY-SA unless otherwise noted.
Advertisement