Edit
watch 01:36
We're Getting Mutants in the MCU - The Loop
Do you like this video?
Play Sound
Sallie Graham 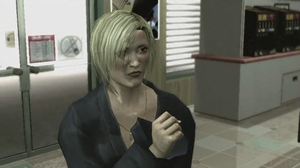 Sallie Graham is the mother of Anna Graham, the first murder victim. Like her daughter, she was the town beauty and attracted a lot of attention when she was younger.

After her husband died in a car accident when Anna was very young, she depended on her daughter for support and was very close to her. Sallie is unemployed and lives on the settlement money from her husband's accident, raising Anna on her own. When Anna was killed, she became depressed and delusional, sometimes running around outside in her robe.

At the beginning of the game, she is found at her house in mourning after her daughter's death. There is a side quest to retrieve Anna's prom dress for her, which she then dances within the living room.

She spends most of her time at home or at SWERY 65, switching between sadness and anger towards York. Richard Dunn is a long time friend and offers Sallie support. If talked to at the SWERY 65, Sallie will say that Richard and Quint are offering her support and that she is starting to feel better.

It is also implied that Richard is in love with Sallie. When asked about his relationship with Anna, Richard says that he's known the family for a long time, as he and Sallie grew up together. When York asks Richard "how long he's been in love with her", Richard gets defensive and tells York to mind his own business.

Sallie sitting at the bar in SWERY 65.