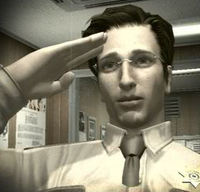 Thomas MacLaine is the Sherrif's assistant at the Greenvale Sheriff's Department, obediently fulfilling any tasks that the Sheriff George Woodman has for him, though other characters consistently remark that he seems ill-suited to do police work. Often he appears timid and unsure of himself, sometimes looking around nervously and acting as if he is ill-at-ease. In his spare time in the evenings, he works as a bartender and cook at the Galaxy of Terror, which is owned by his younger sister, Carol MacLaine.

Although it is unclear whether or not Thomas grew up in Greenvale (there is no mention of anyone in his family living there besides Carol), it is clear that he was well versed in the town's history and lore. He found work at the police station as the sheriff's assistant, where he spent much of his time organizing files and taking care of the paperwork. Despite his effeminate nature in a very masculine profession, Thomas quickly cemented his place in the department. He also established himself as a skilled cook and often prepared meals for himself and the other staff members.

During his time at the station, Thomas fell in love with George Woodman, who he referred to as his "Lovely G." He got a tattoo on his shoulder with the words "Love G" inscribed in a heart. He also discovered files from the hushed murder case from the 1950's in the file room at the station. After showing them to George, he figured out the connections to the killings and the stories of the red seeds, creating what would be known as The Legend of the New Raincoat Killer. To help his love interest achieve the ultimate power promised in the tales, he and Carol built a secret room underneath the Galaxy of Terror, as well as a secret club for George's future victims to join. It is implied that the group engaged in bondage and other forms of sexual behavior. Thomas also began to show signs of mental instability, dressing up as his sister and impersonating her on several occasions.

Even with his sanity slipping, he still maintained his kind and gentle demeanor. He took a liking to Francis York Morgan and helped him out on several occasions. He also proved to be fiercely protective of his sister, comforting her and covering for her when she was in danger. Thomas finally snapped after the deaths of Anna Graham, Becky Ames and Diane Ames, disappearing for a period of time while he made final preparations for George's ascent to power. He succeeds in capturing York and attempts to kill Emily Wyatt, two things he had not considered prior to the start of the murders. Thomas meets a grisly fate in the town's clock tower, dressed as the woman he most admired (Carol) and fighting against the woman he most hated (Emily). The player assumes the role of Emily during this boss battle sequence, and it is up to the player to ensure that Thomas actually dies.

Thomas at the police station.

Thomas at the town meeting.

Thomas and the others track Nick.

Thomas fires his gun at Emily.

Thomas in the Red Room.

Thomas and the murdered girls.

Thomas with the murdered girls and York.
End Spoilers.
Community content is available under CC-BY-SA unless otherwise noted.
Advertisement